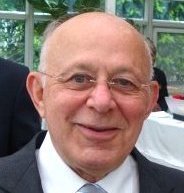 He went on to pursue a successful career as an actuary with Home Life Insurance Company in NYC.  He rose to Chief Financial Officer of the Group Division, retiring from there in 1987.  Bob then served as a consultant with Actuarial Science Associates in Piscataway, NJ for several years.

A devoted member of St. Patrick parish in Chatham, NJ, Bob volunteered in numerous ministries, including supporting St. Patrick School where his three daughters had attended.  He also served his community by volunteering with United Way assisting residents with their income tax filings; and served as Morris County Republican Committeeman for the Board of Elections in Chatham.

Bob loved playing sports.   He was the quarterback of his high school football team and later in life he enjoyed playing racquet sports.  An avid gardener, he planted and harvested flowers and vegetables at both his Chatham, NJ and Chatham, Cape Cod homes.  Besides spending leisure time on Cape Cod with family and friends, his favorite relaxation “up at the Cape” was soaking up the sun and reading on the beach.

Together with his wife and long-time friends, he enjoyed local theater, attending the Paper Mill Playhouse productions, dining out and traveling to destinations in the U.S. and abroad.

A Mass of Christian Burial will be held on Monday, August 19at 11:00am at Immaculate Conception Church, 314 Old Allerton Road, Annandale, NJ.  Interment will immediately follow at the Immaculate Conception Cemetery on the church grounds.  There will be visitation on Sunday, August 18, from 1:30 pm until 5:00pm at the Martin Funeral Home, 1761 NJ-Route 31, Clinton NJ 08809.

In lieu of flowers contributions in Bob’s name may be made through IN MEMORY OF for St. Patrick School, Chatham NJ or to Immaculate Conception School, Annandale, NJ at http://www.inmemof.org/robert-r-moore