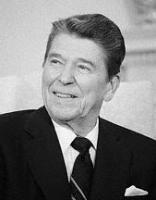 To view our online photo memorial to Ronald Reagan, please click here.Former 40th President of the United States, Ronald Wilson Reagan, 93, passed away on Saturday June 5th, 2004 at his home in Los Angeles after a prolonged battle with Alzheimer's disease. The official cause of death is reported as pneumonia.His wife, Nancy David Reagan, and his two children, Ronald Jr. and Patti Davis, were with Mr. Reagan at the time of his passing.Mr. Reagan's body is to lie in state at the U.S. Capitol in Washington, DC until Friday, before his burial at the Ronald Reagan Presidential Library in Simi Valley, California. Friday, June 11th, will be declared a National Day of Mourning.Ronald Reagan was born on Feb. 6th, 1911 to Jack and Nelle Reagan in Tampico, IL. Jack Reagan worked for the presidential campaign of Franklin D. Roosevelt, who became a hero to the younger Ronald who would later emulate Roosevelt's fireside chats to the nation in his own radio addresses.Ronald Reagan graduated from Eureka College in 1932 and began his media career broadcasting University of Iowa football games on a radio station in Davenport, Iowa. In 1937 he was discovered by a Warner Bros. agent and began his film career. He went on to appear in 59 movie and radio productions, both for Hollywood and for the U.S. Army, as well as a number of television appearances between 1950 and 1971.Mr. Reagan entered politics after becoming a spokesman and host for GE's &quot;General Electric Theatre&quot; in the 1950's. His televised speech in support of Barry Goldwater in 1964 gave him measurable clout and respect within the Republican party. In 1966, he defeated Gov. Pat Brown for the state of California by almost a million votes.After a first run at the presidency in 1976, he successfully defeated incumbent Jimmy Carter in 1980. He became the nation's oldest president. Not long after his election, he negotiated for the safe resolution of the Iranian hostage crisis that had hobbled Carter's re-election campaign.On March 30, 1981, President Reagan was shot by John Hinkley after leaving a meeting with labor leaders in a Washington hotel. One bullet lodged less than an inch from his heart, but Reagan went on to recover fully. He subsequently won battles with colon cancer in 1985 and prostate and skin cancer in 1987.President Reagan appointed the first woman, Sandra Day O'Connor, to the Supreme Court in September of 1981. President Reagan's greatest legacy is perhaps his association with the dissolution of the Soviet Union, and more specifically with his successful missile treaty summit talks with Mikhail Gorbachev in 1988. The former President left office with a two-thirds approval rating for his two terms in office.In November 1994, five years after leaving office, he announced that he had been diagnosed with Alzheimer's disease. At the time he said he had begun &quot;the journey that will lead me into the sunset of my life.&quot;In his announcement, he wrote: &quot;When the Lord calls me home ... I will leave with the greatest love for this country of ours and eternal optimism for its future ... I know that for America there will always be a bright dawn ahead.&quot;Sources:http://www.cnn.com/2004/ALLPOLITICS/06/05/reagan.health/http://www.msnbc.msn.com/id/3638299/http://www.gopusa.com/news/2004/june/0607_reagan_death.shtml