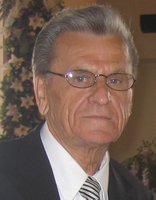 Relatives and friends may gather with the family on Wednesday from 6:00 pm until 8:00 pm at the Martin Funeral Home, 1761 Route 31, Clinton NJ 08809. A Mass of Christian burial will be held at 10:00 am on Thursday, January 16 at Immaculate Conception Church, 316 Old Allerton Road, Annandale, NJ.  Entombment will follow in the Immaculate Conception Mausoleum.