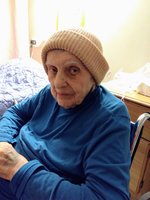 Victoria C. Hatch, age 96, formerly of High Bridge and West New York, NJ died Tuesday, July 21, 2020 at the home of her daughter in Stewartsville.  Victoria was born December 21, 1923 in West New York, NJ. She is the daughter of the late Vincenzo and the late Giovanna (Giardina) Castellano.  She was predeceased by her husband, Robert A. Hatch on  April 7, 2009.

Victoria was born and raised in West New York, NJ and moved to High Bridge NJ in 1962 where she would reside until 2009 when she moved in with her daughter in Stewartsville. Victoria was a graduate of Memorial High School and worked for the Alfred Hoffman and Company in West New York. Victoria also worked at Exact Level and Tool and Computer Power both in High Bridge. She enjoyed watching TV with family and doing word puzzles.

She is survived by her daughter and son in law: Diana Hatch and Charles Japhe of Stewartsville, NJ. Many nieces and nephews in California and Northern NJ. Victoria was predeceased by her four sisters Frances Cerelli, Adeline Fowzer, Mamie and Mary Castellano.

A graveside service will be held at 11:00 am on Friday, July 24 at Evergreen Cemetery, Halsted Street, Clinton, NJ.