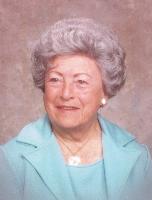 Adele H. Dunlap, died on Sunday February 5, 2017 at the Hunterdon Medical Center at the age of 114. She was born December 12, 1902 in the Clinton Hill section of Newark, NJ. She lived on Hunterdon Street, half block from Clinton Avenue. Adele was the youngest of four children-having three older brothers. She graduated from Southside High School in Newark and then entered Newark State Normal School in preparation for a teaching career. Upon graduation, Adele taught school in Kearney, NJ for five years. During this time, Adele was introduced to Earl "Lynn" Dunlap by mutual friends. They fell in love and married. Adele quit teaching and immediately started a family. They had three children- two boys and a girl. Adele never returned to teaching, as she enjoyed being a housewife, raising her family and tending to her home. Many years later, when she was on her own, she lived at the Jersey Shore and belonged to several senior organizations. She also enjoyed theater parties, luncheons, and trips with her senior friends. When Adele could no longer live alone, she moved in with her son and daughter-in-law in Clinton for 12 years. Adele walked into Country Arch when she was 99 ½ years old. She celebrated her 114th birthday on December 12, 2016. Adele was the eldest resident at Country Arch and held the title of oldest living American. While at Country Arch, her peers and staff described her as being very witty and having a great sense of humor. She enjoyed spending time in her room relaxing as well as attending church services, entertainment, and parties. Adele enjoyed visits from family. She was a local celebrity at Country Arch. Adele was predeceased by her husband Earl Dunlap, daughter Carol Ann, and grandson Robert. Surviving are her loving sons Earl and daughter-in-law Barbara Dunlap of Clinton, NJ, Jimmy and daughter-in-law Janet Dunlap of Florida. Also surviving Adele are her grandchildren Earl Jr., Sue, Chris, Peter, Hillary, and Katie, as well as fifteen great- grandchildren and three great- great grandchildren. A mass of Christian burial will be offered on Friday February 10, 2017 at 11:00am at Immaculate Conception Church, 316 Old Allerton Road, Annandale, NJ 08801. Interment will follow at Gate of Heaven Cemetery, 225 Ridgedale Avenue, East Hanover NJ. Arrangements are under the care of the Martin Funeral Home, 1761 Route 31, Clinton NJ 08809.