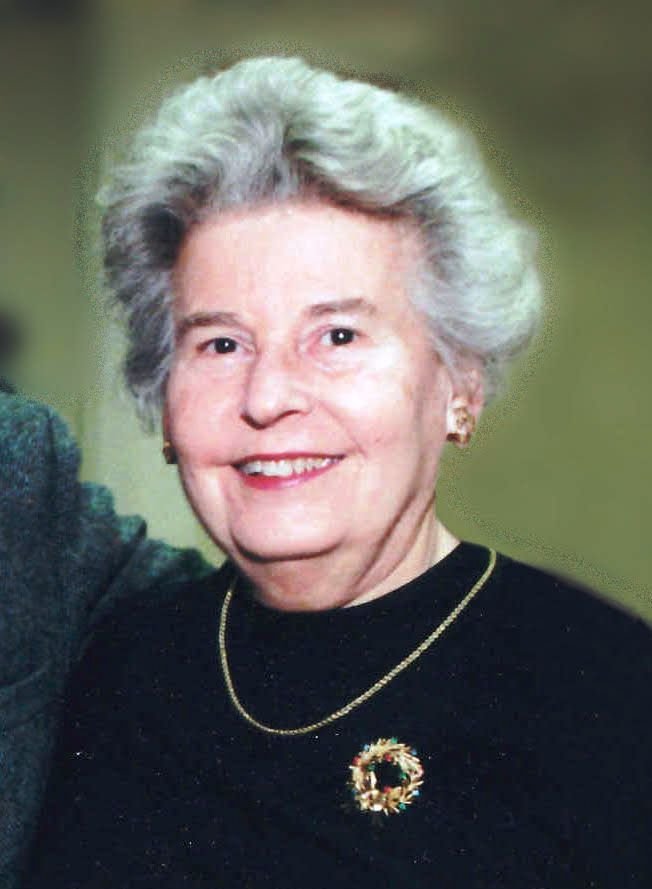 Joan (Conrad) Garey Hooper, 89, passed away peacefully on Thursday, January 31, 2019 at Hunterdon Care Center in Flemington, NJ, with her husband nearby.

Joan was born in Elizabeth, NJ to Dorothy (Conrad) and Carlton Garey on 1/20/30. Her family moved to Freehold, NJ, and then to Hastings-on-Hudson, NY, where she graduated from Hastings High School in 1948. She went on to graduate from Centenary College in Hackettstown, NJ in 1950 receiving an associate degree. Joan was a member of the Prominent Centenary Singers, a coral group that performed all over the country. She was also a member of the Art Club and Sigma Epsilon Phi sorority. Later in her life, she became a member of the President's Advisory Council and received the prestigious Gold Dome Award given for stewardship and leadership of the college. In 2005, she received the VanWinkle Family Achievement Award, one of the university's highest honors. Joan went on to The College of New York State at New Paltz, NY. While working for General Electric in New York City (from 1952-1958), she met a gentleman named Frank Hooper in 1956. They were engaged in 1957 and married in 1958.

Mr. and Mrs. Hooper have resided in Clinton, NJ for the past 55 years. She and her husband were founding members of The Church of the Holy Spirit, Lebanon, NJ, and have been active parishioners for over 50 years. Joan was a longtime supporter of the Clinton Christmas parade where she would sponsor and revel in the performance of the St. Ann's Bagpipe Band from Hampton, NJ and the ever popular, Polish American String Band (the Mummers) from Philadelphia, PA.

Joan was a founding member of the 1759 Vought House Restoration Society, Annandale, NJ. Joan loved to paint, particularly with oil. Her home is decorated with many originals of places she had visited with her husband. Especially paintings of their five memorable trips to England, a country near and dear to her heart as a member of the Fitz-Randolph family. She enjoyed many trips to the Adirondacks with her family and friends. Joan loved music, especially singing patriotic songs, a favorite being, The Land of Hope and Glory.

Viewing will be Saturday, February 9, 2019 at the Martin Funeral Home, 9:30-10:30 am. A mass will be offered at 11:00 am at The Church of the Holy Spirit, Lebanon, NJ, immediately following the viewing. Interment will be in North Creek, NY at the Hooper Family plot, joining her daughter and son. Donations may be made to The Guild of Clinton Christmas Parade, 15 West Main Street, Clinton, NJ 08809.

Share Your Memory of
Joan
Upload Your Memory View All Memories
Be the first to upload a memory!