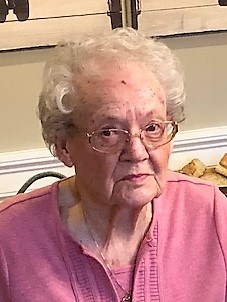 Lillian Caroline Fearn, 94, passed away peacefully on March 17, 2020 surrounded by her family at her home in Pittstown, New Jersey. Born on July 14, 1925, Lillian spent most of her childhood in Orange, New Jersey. She married Sam Myer at the age of 16 and raised her children, Bill and Sandy, in Cedar Grove where she worked as an assembler in Beckman Manufacturing. Later in life Lillian married Sam Fearn who had two sons, Brian and Terry, with whom Lillian became very close. Lillian and Sam enjoyed traveling throughout the country, their favorite location to visit being Colorado. The career that brought the most joy to Lillian's life came after retirement when she became a nanny for the Bogan family in Sea Girt. "Aunt Lil" helped raise Mary Patrice, Raymond, Patrick and Francis from infants to adulthood. Lillian was an active parishioner and choir member of the Union Church of Lavallette. She had a close- knit relationship with her church community. Aunt Lil had the uncanny ability to reach people with her compassion and desire to help others; she was loved by many. She enjoyed the simple things in life— cooking, reading, and traveling just to name a few. Lillian is survived by her sister Viola; children: William and Susan Myer, Sandra Carbone, Brian Fearn, Terry and Marilyn Fearn; her grandchildren: Diana, Bill Jr., Don Jr., Kristen, Rick, Mike, Ryan, Meghan, Christopher, Kevin, Allison, Andrea and John (deceased); 21 great grandchildren; and her very best friend, Eleanor Dougherty. She is predeceased by husbands Sam Myer and Sam Fearn. A memorial service is to be announced at a later date. In lieu of flowers, donations can be sent to The Union Church of Lavallette, 25 Philadelphia Avenue, Lavallette, NJ 08735.

Share Your Memory of
Lillian
Upload Your Memory View All Memories
Be the first to upload a memory!
Share A Memory
Plant a Tree