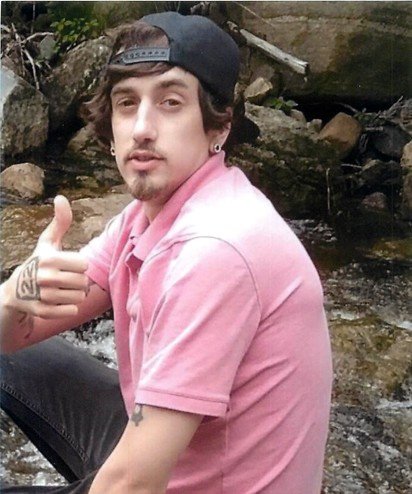 An Honoring of the life of John M. Rannells III (“Jackson”)

Jackson was born to his joy filled parents Ellen & Jack Rannells on November 1, 1990 at Morristown Memorial Hospital, Morristown NJ.  He had an adorable big sister Lea, 5 years his elder, who would try her best to guide and protect him in the years to come.  Jackson was an energetic and happy young boy with incredible blue eyes who was sweet, helpful, mischievous, and loving. He navigated the Bridgewater public school system until freshman year when he moved to Branchburg and began attending Somerville HS.  Although he did well at first and always had a circle of friends, Jackson, with his far-off dreaming and deeply inquisitive mind, was not fond of the drone of a public school education and the rote learning it required.  He left sooner than ideal but immediately acquired his GED with flying colors.

Unfortunately, soon after, teen rebellion and partying opened the flood gates to a world that would lead him down a difficult path for too many years. When the party lights dimmed, Jackson was left to navigate the arduous abyss of addiction. However, he always had a deep kind spirit and incredibly tender heart.  His energy, his ideas, his wit, his laugh, his love were a strong force that positively guided him through a variety of both positive and negative experiences.  The struggle was real, the consequences overwhelming. He mostly survived but not without the lasting scars.

In recent years, Jackson’s maturity and hope for the future strengthened and brought clarity to his path.  His most significant change was his surrender and commitment to Christ, his adult baptism and his intense desire to someday help others in need.  He had great plans to one day organize an event he envisioned called “Not an Easy Fix…We honor, We hope, We rise” to bring awareness to the addiction community, to provide valuable resources and to acknowledge the 8 close friends amongst many others that left this earth far too soon before him.  This event was just waiting for the right time…a non-profit was formed, a Board of Directors and officers were chosen and a plan was outlined.  He also had dreams of one day opening a sober living home called Saludis, with each room displaying a tribute to his fallen friends and their young lives.

Jackson’s heart never let the sun go down or his family leave the house without telling them he loved them, nor was he ever stingy with a sincere apology. He was affectionate and attentive to what he felt mattered. His genius mind was always at work as he researched topics of interest and viewed informative YouTubes for hours on end.  His faith, his politics, his creativity, his craving of unique and meaningful music and his many talents were all approached with passion and a desire for the Truth.  Diverse music fed his soul almost every day…from Leon Bridges to Tom MacDonald, Benjamin Tod and White Buffalo to Sam Cooke, Etta James and Frank Sinatra.  His other talents included athletic skills for almost any game (he was excited to be close to his score goal of 180 in recent treks to the bowling alley with his dad), his amazing writing ability, his freelance legal assistance projects and his eye for detail with his marketing/promotional skills such as his recent audio-visual business plan for Grandmaster Flash. He loved movies (his favorite (The Madman and the Professor), animals especially cats like his soulmate Luna, the beauty and serenity of nature, the Philadelphia Eagles, hanging out with friends and just chillin’.  Also, repeatedly, Jackson would talk of his aspiration of someday marrying a wonderful woman, to be an honoring husband and to experience the gift of becoming a good dad to his children.

He leaves behind, until they meet again, his mom and dad (Ellen & Jack), his devoted sister Lea and his brother-in-law James, his caring extended family of aunts, uncles and cousins as well as his many loyal friends. Jackson was someone who truly knew how to love unconditionally.  It saddened him that due to circumstances he was not able to see so many for the past too many years.

His family feels deeply about breaking the stigma of addiction. These good souls never planned on such a life and would give anything to wipe the slate clean.  It is a chronic brain disease prone to relapse and they are not to be shamed, not to be forgotten.  Please keep them in your mind and actions whenever and wherever you can to help make a change in the world towards understanding, compassion, acceptance and support of those that are afflicted.

If you would like to support Jackson’s dream of “Not an Easy Fix”, your donation may be made through visiting his personal memorial donation page at https://inmemof.org/john-jackson-rannells-iii, or by clicking on the "Not An Easy Fix Memorial Tribute Fund" button above. A Celebration of Life party with Jackson’s family and friends will be held a few months from now when the weather warms and covid hopefully wanes. Information will be forthcoming. Thank you and God bless.

Share Your Memory of
John
Upload Your Memory View All Memories
Be the first to upload a memory!
Share A Memory
Plant a Tree