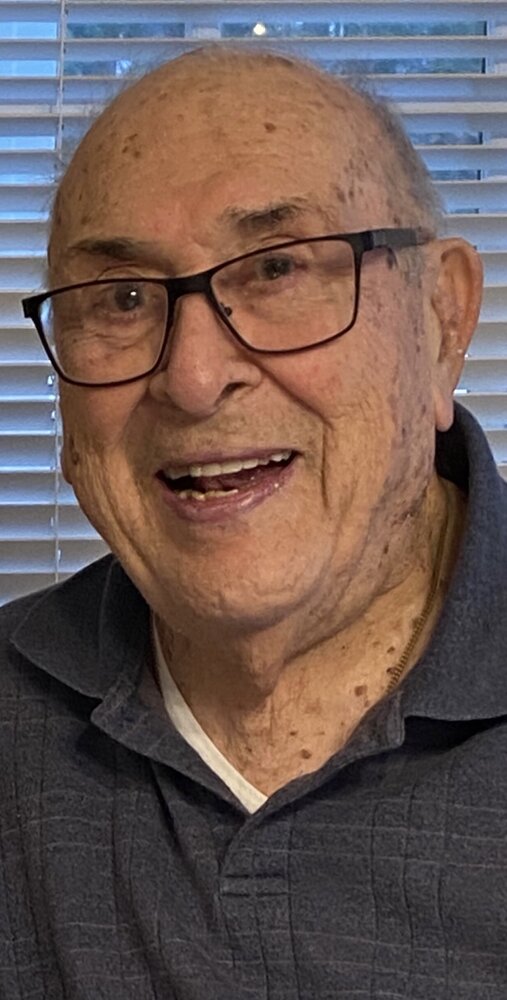 Carl Robert Perone, 98, of Clinton, NJ and Hollywood, Florida, passed away peacefully on September10th, 2022. Carl was born in Passaic, New Jersey to the late Vincent James Perone Sr. and Giovanna (Jennie) DeFrancesca. Carl was raised in Hackensack, New Jersey and graduated from Hackensack High School in 1942.

Immediately following his graduation Carl joined the US Army and went to serve in World War II. While in the Army, Carl attained the rank of Corporal while serving with the 572 Armored Division in Germany, during the Battle of the Bulge, under the direction of General George S. Patton. Following the war, he was awarded the American Campaign Medal, Good Conduct Medal, European African Middle Eastern Campaign Medal, and the World War II Victory Medal.

Upon his return home Carl was quick to marry his first love, Grace Carbone, on September 22, 1946. Together Grace and Carl raised three daughters Diane, Carla, and Jeannie, whom they cherished. Carl brought his family to Hollywood, Florida where he was the Co-Owner of the Royal Market grocery store with his brother John.

Carl worked throughout his life as a Butcher, Caterer, and Chef. He was a man strong in his faith and had been a parishioner at St. John of the Cross Catholic Church in Vero Beach, Florida, as well as a parishioner at Immaculate Conception Catholic Church in Annandale, New Jersey. Carl was previously a member of the Rotary Club and the Knights of Columbus. After his retirement, Carl enjoyed visiting with his ever-growing family and many friends. He also enjoyed playing the piano, talking and texting on his phone, reading, listening to music, and of course cooking for anyone he could feed.

In accordance with Carl’s wishes, cremation was held privately. A Catholic Memorial Mass is scheduled for October 22, 2022, 10 AM at Immaculate Conception Church in Annandale, NJ, with interment immediately following in the Immaculate Conception Church Mausoleum. Arrangements are under the care of Martin Funeral Home, Clinton NJ. To share memories with the family please visit www.martinfh.com

In lieu of flowers, donations in remembrance of Carl can be made to your local Hospice organization, Food for the Poor, or a charity of your choice.

Share Your Memory of
Carl
Upload Your Memory View All Memories
Be the first to upload a memory!
Share A Memory
Send Flowers
Plant a Tree