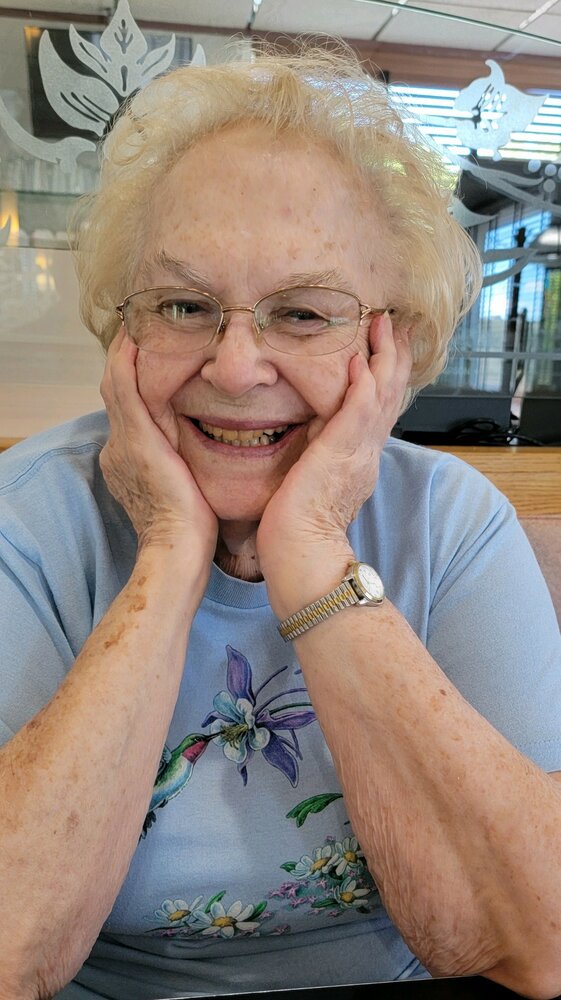 Barbara and Joe raised 6 children in their 100-year-old Victorian house on Maple Street, which was also often filled with many of their childrens friends. The doors were always unlocked, and neighborhood kids knew Mrs. Tichy would patch them up if they got hurt at the town park across the street.

With her beautiful blue eyes and warm smile, Barb made many friends during her 65 years living in Lebanon, NJ. She was often seen sitting on her front porch visiting with neighbors, their children, and their pets. She was one of those rare people that maintained friendships for decades, sent cards for birthdays, thank you notes, just to say hello notes.  She started a family tradition the lasted upwards of 40 years of weeklong trips to the Jersey Shore in the summers, much to the enjoyment of all. She enjoyed entertaining friends, going to shows, attending concerts, going on trips and cruises, and eating good food.  Oh, did she enjoy eating good food.

She was raised in a family of card players.  She and Joe often played Pinochle with other couples around Lebanon, and Barb continued playing cards with friends and neighbors until just before she left us.  There were untold family game nights, but it was most difficult to beat her in Scrabble.

Mary Barbara Rusk was born on May 23rd, 1933, in East Stroudsburg, PA., the daughter of the late George Robert Rusk and Mary Sophie Kasperski.  The oldest child with three siblings, Beverly, Veronica, and John.

Barbara graduated from East Stroudsburg High School in 1950 but delayed her college education to ultimately become a Licensed Clinical Social Worker.  Her Bachelors and Masters degrees were earned from Rutgers University, NJ, in her late 40s and early 50s. Her later career took her from Hagedorn Psychiatric Hospital in Glen Gardner, NJ to the Hunterdon Developmental Center in Clinton, NJ, where she was a conscientious worker and worked hard to keep her client’s best interests in mind.  She always was looking out for the underdog and the underrepresented.

Barb was a giver of her time and her talents.  She volunteered at the Hunterdon Medical Center, delivered Meals on Wheels, was a Brownie leader, PTA member and president.   She read to children in the Borough school as well as putting together gift baskets and prizes for local groups and fund raisers.  Barbara only recently gave up her position as secretary of the Seniors Group in Lebanon, of which she has been an active member for over 15 years.

Barbara served on committees for the 4th of July Parade, including chairing the Baby Parade and supervising her teenage children with friends to blow up (inflate the old-fashioned way) the balloons for clowns for the town Fourth of July Parade. She supervised and ran the summer pre-school program in the park for the Recreation Commission, she led her family in boiling and coloring hundreds of eggs for the borough Easter egg hunt. and especially loved creating the crown and cape for the lucky child who found the silver dollar in the cake served at the Tree Burning celebration in the Borough Park in January.

Barbara was very crafty, her years working at the Pink Sleigh in Oldwick behind the ribbon counter inspired her to design many Christmas ornaments that her family cherishes to this day.

She also enjoyed flowers and gardening, house plants, and having many beautiful hanging baskets on her porch in the warm weather.  She especially liked pansies, iris and peonies.

A Memorial Celebration of Life will be held for Barbara sometime in the Spring of 2023. To send condolences to the family please visit www.martinfh.com

Share Your Memory of
Barbara
Upload Your Memory View All Memories
Be the first to upload a memory!
Share A Memory
Send Flowers
Plant a Tree